Steelers Are Super, But Packers Are NFL’s Best

Originally posted on February 2, 2009 by Sportslifer

SportsLifer Rewind: I posted this blog two years ago, after the Steelers won their sixth Super Bowl by beating the Arizona Cardinals. Who knew that Super Bowl XLV would pit the Steelers against the Packers.

Not to rain on Pittsburgh’s parade (hey, we all love a parade), but to claim the Steelers are the best team in NFL history is a bit over the top.

Granted, the Steelers have now win six Super Bowls, more than any other franchise — the Cowboys and the 49ers have each won five. So if you want to give Pittsburgh the nod as the best team in the Super Bowl era, well who’s to argue. No disputing the fact that they are a model franchise, classy and competitive.

But the best all-time? Not. That’s like claiming the team that has won the most World Series since baseball adopted its playoff format in 1969 is the best ever. (That team happens to be the Yankees with six (now seven) championships, but they won 20 more before 1969).

The Steelers were formed in 1933, and were NFL doormats for more than 40 years, never winning so much as a conference championship. Five years after shifting to the AFC Central in 1970, the Steelers won their first Super Bowl.

Packers Have Most Titles
So who is the best? Counting three Super Bowls, the Green Bay Packers have won 12 NFL, including the first two Super Bowls, since the formation of the NFL in 1920, the  Packers have actually won 12 titles. 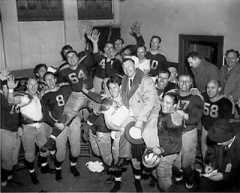 Another team that’s sometimes forgotten in the haze of football history is the Cleveland Browns. The Browns won four straight championships in the All-America Football Conference (AAFC) before that league was disbanded in 1950. The Browns then proceeded to make six straight appearances in the NFL championship game, winning in 1950, 1954 and 1955.

Cleveland won another championship in 1964, but has never been to the Super Bowl.

Cleaning out the Notebook
Among the dozen or more “experts” in the booth for Super Bowl XLIII, it’s hard to believe NBC would include Matt Millen. Yes, the same Matt Millen, the general manager who set the Detroit Lions back years. Heck, I wouldn’t trust this guy to pick my fantasy football team.

Lots of fans, even football fanatics, were looking forward to the halftime show as much as the game. Bruce Springsteen didn’t disappoint. He never does. That’s why he’s the Boss.

According to the NFL head of officials, the play was reviewed and upheld. For what, 20 seconds?

Rules state that if Warner’s arm is moving in a forward motion with the ball still in his hand when it comes out, the play should be ruled an incomplete pass, not a fumble.

Oh, and one more thing.

After the play, the Steelers were called for a personal foul, so if the play had been reversed, and with the 15-yard penalty yardage marked off, the Cardinals would have had the ball on the Pittsburgh 30 with about seven seconds remaining.

Certainly time enough for a miracle.

The Ring-Leaders: Champions of Championships

Do the math. The Boston Celtics have won 16 NBA titles, the Los Angeles (nee Minneapolis) Lakers 14. When the 62nd NBA Finals are completed in a few weeks, the Celtics and the Lakers will have combined for 31 titles, exactly half of the 62 championships. This is their 11th meeting in the finals, another NBA record.

What about the other sports?. Who are the champions of championships?

It starts with the New York Yankees, the king of champions. The Yankees have won 26 World Series, the most in any of the North American team sports. That’s more than double the number of championships won by the St. Louis Cardinals (10) and Philadelphia-Oakland A’s (9).

In the NFL, the Dallas Cowboys, Pittsburgh Steelers and San Francisco 49ers have each won five Super Bowls. The Green Packers have won nine total NFL titles and the Chicago Bears 7 since the first NFL championship game in 1933.

In hockey, the Montreal Canadiens, Les Habitants, are far away the ring-leaders with 23 Stanley Cups. The Habs are followed by the Toronto Arenas-St. Pats-Maple Leafs with 13 and the Detroit Red Wings with 11, including this year’s Stanley Cup.

UCLA has won 11 NCAA basketball championships and Kentucky seven since the advent of the NCAA tournament in 1939. Kentucky also won a national championship in 1933.