Almost Perfect: A Mustache on the Mona Lisa

This play at first base cost Armando Galarraga a chance at baseball immortality.

When umpire Jim Joyce blew the call on Armando Galarraga’s bid for a perfect game, he not only painted a mustache on the Mona Lisa, he also opened Pandora’s box to all sorts of discussion, debate and historical comparisons.

For one, the inevitable cry for expanded replay rules to decide close calls on the bases ensued. (No, the games run too long as is.)

Secondly, many appealed to commissioner Bud Selig to invoke the “best interests of the game” clause to overturn Joyce’s call and give Galarraga the perfecto. (No, breaking precedent here could lead to all sorts of controversy moving forward.)

Unfortunately, Joyce’s call will go down as one of the worst ever by an umpire, considering the circumstances. He joins the company of Don Denkinger, whose errant ninth inning call in game six of the 1985 World Series gave the Royals life and ultimately cost the Cardinals a championship.

Ironically, if Galarraga had dropped Miguel Cabrera’s toss, it would have been ruled an error, and a no-hitter would still be in effect.

Through it all, Galarraga exhibited remarkable poise and grace — especially when considering he’d been deprived of baseball immortality. In some strange way, he’ll be  remembered more for losing he perfecto than some of the 20 other pitchers who have been perfect since 1880.

And Joyce, one of the better umpires in the game today, showed class by admitting his mistake and apologizing to Galarraga.

12 Perfect Innings
Many still recall the hard-luck lefty Harvey Haddix, above right, of the Pirates, who pitched 12 perfect innings against the Milwaukee Braves only to lose the perfect game, no-hitter, shutout and game in the 13th. When baseball redefined scoring rules in 1991, Haddix lost credit for both a perfect game and a no-hitter.

And then there was the strange case of Ernie Shore of the Red Sox, who in 1917 relieved Babe Ruth in the first inning after Ruth walked the first batter, argued the call and got tossed by home plate umpire Brick Owens, who the Babe slugged on his way to the clubhouse. The runner was thrown out stealing, and Shore then retired the next 26 Washington Senators. For years, Shore was credited with a perfect game, but the ruling was changed and the game is now listed as a shared no-hitter between Shore and Ruth.

In addition to Galarraga, nine other pitchers have retired the first 26 batters only to lose perfect games. Most recently, Yankees right-hander Mike Mussina came within a strike of a perfect game at Fenway Park in 1999 before Carl Everett of the Red Sox lined a single to left. 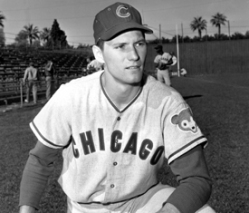 At Wrigley Field in 1972, Cubs pitcher Milt Pappas, left, was one strike away from a perfect game with a 2-2 count on Padres pinch-hitter Larry Stahl when fate, in the person of home plate umpire Bruce Froemming, intervened. Froemming called the next two pitches — both of which were close — balls. Pappas recovered to complete the no-hitter, but to this day he continues to begrudge Froemming.

Some 25 years later, a Chicago radio personality, during an interview with Pappas, got Froemming on the phone and the two argued on the air. Pappas also said in 2006 that he has seen video tape footage of that game on WGNtelevision and can see Froemming smirking immediately after the walk was issued; Froemming denied the charge.

Here’s the almost perfect list. Each of the following pitchers lost a perfect game with two outs in the ninth.

1908: Hooks Wiltse
New York Giants (vs. Philadelphia Phillies)
George McQuillan was hit with a pitch, but Wiltse ended the game with a 10-inning no-hitter.

1972: Milt Pappas
Chicago (vs. San Diego)
Larry Stahl was walked, but Pappas ended the game with a no-hitter.

2001: Mike Mussina
New York (at and vs. Boston)
Carl Everett hit a single.

PS — The SportsLifer was lucky enough to witness one of the 20 perfect games in baseball history. I was in the lower right field seats at Yankee Stadium with my son, nephew and brother-in-law on a May day in 1998 when Yankees left-hander David Wells pitched a perfect game against the Minnesota Twins. As we left the Stadium that afternoon, I told my nephew, seven-years-old at the time, that he could go to a thousand ballgames and never see another perfect game.