Well, well, Stephen Curry and the Golden State Warriors are in a pickle. The Dubs set an NBA record with 73 victories, but unless they are able to stage a miracle comeback against Oklahoma City in the Western Conference finals, they’re toast.

And if they lose to the Thunder (or somehow make the Finals and lose to Cleveland), the Warriors will have no claim…none… to the title of NBA’s best team ever. It happens. In 2007, the New England Patriots finished the regular season unbeaten at 16-0 and yet lost to the Giants in Super Bowl 42. In 2001, the Seattle Mariners won 116 games, tying the 1906 Cubs for the most in MLB history. The Mariners were knocked out by the Yankees in five games in the ALCS. And the Cubs lost the 1906 World Series to their crosstown rivals, the White Sox, aka the Hitless Wonders.

The Warriors won the NBA title last year following a 67-15 regular season, tied for seventh best all-time. The 1986 Celtics, 1992 Bulls and 2000 Lakers all won championships after finishing 67-15. The 2007 Mavericks and this year’s Spurs also went 67-15, but were knocked out before the Western Conference Finals. The Washington Capitals were 49-11 in 1947, the NBA’s first season, but lost in the semifinals.

The Canadiens set an NHL record with 132 points in 1977 and won the Stanley Cup in the midst of a four-year championships run. But the 1996 Red Wings, with a record 62 wins and 131 points, were derailed by the Avalanche in the Western Conference Finals.

Bill Russell and Red Auerbach of the Boston Celtics combined to win seven NBA Finals against the Lakers.

Two years ago, the SportsLifer previewed the 2008 NBA Finals between the Boston Celtics and the Los Angeles Lakers with a look back at their history in championships matchups.

The Lakers responded in 2009, returning to the Finals for the sixth time in 10 years. Kobe Bryant led the way as Los Angeles beat Orlando in five games to won its 15th championship.

Now the two clubs who have combined for more than half of all NBA championships are meeting for the 11th time, with the Celtics holding a 9-2 advantage in previous meetings.

They’re the Lennon and McCartney of basketball, the Rogers and Astaire of hoops, the Batman and Robin of the hardwood.

They’re the Celtics and the Lakers. These two trademark NBA fantasies have combined for 30 championships, 16 by the Celtics.

They’ve clashed 10 times in the NBA Finals, beginning in 1959 when the Celtics swept the Minneapolis Lakers in four straight to start Boston’s run of eight straight titles.

The Celtics won the first eight matchups; four went the full seven games. The Lakers took the final two, the last in 1987, each in six games.

In 1962, Frank Selvy of Los Angeles had an open jumper with a chance to beat the Celtics in Game Seven. He missed and Boston won in overtime behind 30 points and 40 rebounds from Bill Russell. In that Series Laker forward Elgin Baylor scored an NBA playoff record 61 points to lift his team to a Game 5 win at the Boston Garden. However, with a chance to win the championship on their home floor, the Lakers lost Game Six, and the combatants returned to the Boston Garden for the finale.

The following year, Boston’s Bob Cousy dribbled out the clock in the final game of his historic career as the Celtics once again triumphed, this time in six games.

In 1966, the Celtics held on for a 95-93 win in Game Seven to complete their run of eight straight titles. Boston coach Red Auerbach retired after the game, with Russell assuming player-coach duties.

The Celtics won another seven-game showdown with the Lakers in 1969, although Jerry West, right, was the MVP of the Series, the only player from a losing team to win the NBA Finals MVP. West, whose 29.1 playoff scoring average ranks third to Michael Jordan and Allen Iverson, had 42 points, 13 rebounds and 12 assists in Game Seven, but Boston prevailed 108-106 at the Los Angeles Forum.

Lakers’ owner Jack Kent Cooke was already planning his victory celebration as he ordered thousands of balloons suspended from the Forum rafters. 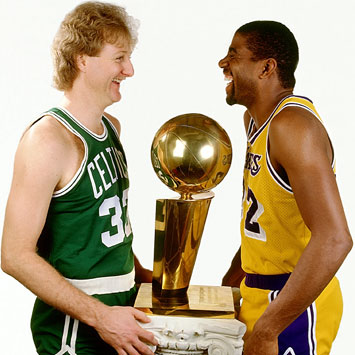 The Celtics and Lakers resumed their rivalry 15 years later as Larry Bird and Magic Johnson, right, squared off for the first time in the playoffs. And the Celtics again won in seven games, Bird averaging 27.4 points and 14 rebounds per game to win MVP honors.

The next year, Kareem Abdul-Jabbar was the Finals MVP and the Lakers finally beat Boston, 4-2, after eight straight playoff losses. And in 1987, Magic Johnson was the Finals MVP, his “junior sky hook” proving to be the turning point of the series, giving the Lakers a 3-1 lead on the way to a six-game triumph.

And they haven’t played since. The Celtics haven’t won an NBA title since 1986, The Lakers won the title again in 1988, beating the Detroit Pistons. Los Angeles last won in 2002, completing a three-peat with a sweep of the New Jersey Nets.

Believe It: No Celtic Has Ever Led The NBA in Scoring

Incredibly, no Boston Celtic has ever won the NBA scoring title

The Celtics, along with the New York Knicks, are the only original NBA teams dating back to the Basketball Association of America (BAA) which began in 1946. The Philadelphia Warriors, who moved to California to become the Golden State Warriors in 1962, were also part of that inaugural BAA season.

BTW, Lakers who led the league in scoring were George Mikan, three times with Minneapolis beginning in 1949, Jerry West in 1970 and Shaquille O’Neal in 2000.

The Ring-Leaders: Champions of Championships

Do the math. The Boston Celtics have won 16 NBA titles, the Los Angeles (nee Minneapolis) Lakers 14. When the 62nd NBA Finals are completed in a few weeks, the Celtics and the Lakers will have combined for 31 titles, exactly half of the 62 championships. This is their 11th meeting in the finals, another NBA record.

What about the other sports?. Who are the champions of championships?

It starts with the New York Yankees, the king of champions. The Yankees have won 26 World Series, the most in any of the North American team sports. That’s more than double the number of championships won by the St. Louis Cardinals (10) and Philadelphia-Oakland A’s (9).

In the NFL, the Dallas Cowboys, Pittsburgh Steelers and San Francisco 49ers have each won five Super Bowls. The Green Packers have won nine total NFL titles and the Chicago Bears 7 since the first NFL championship game in 1933.

In hockey, the Montreal Canadiens, Les Habitants, are far away the ring-leaders with 23 Stanley Cups. The Habs are followed by the Toronto Arenas-St. Pats-Maple Leafs with 13 and the Detroit Red Wings with 11, including this year’s Stanley Cup.

UCLA has won 11 NCAA basketball championships and Kentucky seven since the advent of the NCAA tournament in 1939. Kentucky also won a national championship in 1933.