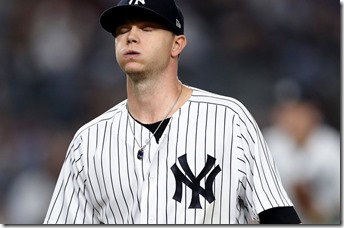 GM Brian Cashman has made many shrewd moves the past several years in making the Yankees a contender once again. The acquisition of Sonny Gray isn’t one of them.

Cashman dealt three prospects – James Kaprielian, Jorge Mateo and Dustin Fowler —  to the Oakland A’s for Gray before the trade deadline last July. At the time, most thought the Yankees were getting a solid, young No. 2 starter.

Instead, Sonny has evoked nightmare visions of guys like Ed Whitson, Carl Pavano, Kei Igawa, Javier Vasquez and Kevin Brown, all of whom flopped in pinstripes.

Facing the Red Sox on the last day of June, Gray crumbled in the first inning. After retiring the first two batters, Gray loaded the bases and then surrendered a grand slam to Rafael Devers. He couldn’t get off the mound fast enough midway through the third inning, trailing 6-0 with boos cascading down from irate Yankee fans..

“That was embarrassing for me and for everybody in here,” Gray said in the home clubhouse after the 11-0 loss. “If I was out there, I probably would’ve booed me louder.”

Statistics tell the story, and it’s not good one. In fact, Gray’s performance as a Yankee has been historically bad. All Yankee pitchers are expected to pitch well at home….and show a propensity for beating the Red Sox. Gary has done neither.

Since coming to the Bronx, Gray has a 4-6 record and a 7.10 ERA, highest of any Yankee pitcher in history who has started at least eight games at Yankee Stadium.

This year, Sonny has an 8.25 ERA in eight home starts, the worst in Yankees history. Pavano was the previous leader in this dubious category with a 6.89 ERA.

Against Boston, the Yankees have lost all four of Gray’s starts in the past two seasons. His ERA against the Red Sox is 9.35, better only than Jose Contreras (16.43) and Andy Hawkins (14.44).

In eight career starts against the Red Sox overall, including his lone win while a member of the A’s, Gray is 1-6 with a 6.98 ERA.

At least you got something right, Sonny.