10 Things That Make Me an Old Guy

The Polo Grounds:  Been there, done that.

1. I went to a baseball game at the Polo Grounds

3. I saw an NBA doubleheader…at the old Madison Square Garden

4. I remember when New York Football Giants games — even championship games – were blacked out at home

6. I watched the Giants play at Yankee Stadium….and the Yale Bowl too

7. I saw the Rangers face off against the  Bruins at the old Garden in the days of the Original Six

9. I remember goalies without masks and canvas Cons.

10. I saw Honus Wagner play shortstop. NOT. I may be old….but not that old. Wanted to see if you were paying attention lol

The newspaper industry continues in full free-fall mode, with shutdowns, layoffs and cutbacks…and more rumors of impending doom every day.

On the heels of the Rocky Mountain News closing, the Seattle Post-Intelligencier is said to be next on the list.

TIME, a magazine in jeopardy judging by the lack of advertising and shrinking size of weekly issues, ran a list of the 10 most endangered newspapers in America: Among the findings:

The Philadelphia Daily News, which tops the TIME list,  has filed for bankruptcy.

The Boston Globe is said to be losing a million dollars a week by some accounts.

The New York Daily News, one of several papers struggling in the New York metropolitan area, could easily lose $60 or $70 million.

The San Francisco Chronicle recently stated it was in danger of being closed or sold if it doesn’t stop losing money.

Newspapers have always provided their readers with a creative and distinct way of packaging the news.

For example, take the headline, the teaser that steers the reader to the story.

Headline-writing is an art. And writing headlines for tabloid newspapers requires an extra amount of genius and humor, sprinkled with Scrabble ability.

Since the news broke that Alex Rodriguez used steroids, the back page of the New York Daily News featured A-Rod three of every four days for a month.

Here’s a sampling of those headlines.

When it was first revealed that A-Rod may have used illegal drugs:

When he claimed ignorance on where he got steroids:

When he spoke about getting the drugs from his cousin:

When stories about A-Rod’s hip injury first began to surface:

Not to be out-headlined, the New York Post said the Alex dug himself deeper:

From the time I attended college until my early 30s, I worked as a writer and editor for several daily newspapers. And there are a couple of headlines that I’m particularly proud of writing.

While working in the composing room at the Worcester Telegram my senior year at Holy Cross College, the Yankees beat White Sox knuckleballer Wilbur Wood in both ends of a doubleheader:

Later, at the Fort Lauderdale Sun-Sentinel, the Phillies won their first World Series in nearly a century. My headline was simply:

When Craig Stadler won the 1982 Masters, the heading was:

It’s the latest sad symbol of an industry that is slowly dying. In this age of instant Internet access and wireless connections everywhere, people are turning away from print to get their news.

Or as Bernie Lincicome, sports columnist for the News, wrote in his final column: “The best newspaper is dead and for no good reason, save the spine to fight on, a battle lost to lessers and to a marketplace diverted by ease. The world today can be held in the palm of the hand, with all the news and sounds and motion a tap away.”

The world is changing, and unfortunately those changes are killing daily newspapers.

Dave Krieger, another Rocky sports columnist said:” I still don’t get how a newspaper with 200,000 paying subscribers and hundreds of thousands more readers on the  Web cannot make a go of it. Obviously, I’m not an MBA. Not our fault, the suits say. Business model’s fault. So who came up with the business model?”

New Business Model
That’s the problem. There’s a new business model, and it’s different than the old model. Who knows, perhaps newspapers got it wrong right from the start, when they decided not to charge readers for access to the content on their web sites.

The world is flat. We live in an on-demand society, and people want their news right away. They can’t wait for tomorrow’s paper. That’s old news now.

As a result newspapers across the USA are suffering. Advertising rates are falling. Circulation is declining. Good people are losing their jobs. And papers like the Rocky Mountain News are being forced out of business.

But something is being lost in the transition. The in-depth story, the catchy headline, and especially quality reporting and eloquent writing are lost for the ages every time a paper dies.

Endings are difficult. They can make grown men cry. In his farewell, Lincicome compared the demise of the Rocky Mountain News to some of the sad finales he’s witnessed in sports through the years:

“My most vivid memory is the last fight of Muhammad Ali, in Freeport, The Bahamas, a shadow lurching and gasping in the ring, and then finally slumped in his makeshift dressing area, a cinderblock men’s room reeking of urine, facing the finish, a weeping young John Travolta at Ali’s knee. 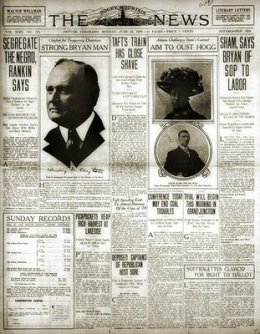 “Martina Navratilova, exiting Centre Court for the final time, stopped to pull up a piece of sod. Jack Nicklaus posing on the footbridge on the 18th hole at St. Andrews, stubbornly dressed in a sweater vest in fashion when he was.

“Joe Louis, the great Brown Bomber, became a prop to various promoters, and I cannot see old films of him in his prime without recalling the last time I saw him, poking around a post-press conference dining room looking for left over coffee in discarded cups still warm enough to drink.”

Great Writers
Where else are you going to find writing like that. I worked with Bernie Lincicome for three years at the Fort Lauderdale News and Sun-Sentinel. The rule for editors working Bernie’s copy was simple: don’t touch the prose, outside of spelling and fact checks. No rewrite required.

I was fortunate enough to work with some other great writers during my 10 years in the newspaper business — writers like Robert Cormier, my mentor, a fellow columnist at the Fitchhburg Sentinel and Leominster Enterprise. Cormier was also a novelist, the author of successful teenage books like “The Chocolate War,” “I Am the Cheese” and “After the First Death.”

And while in Fitchburg, an old New England industrial town,  I was fortunate enough to work with a colleague like John Helyar, author of “Barbarians at the Gate” and  “The Lords of the Realm.”

And later in Fort Lauderdale, my colleagues included writers like Gene Wojciechowski (now at espn.com), and Bill Plaschke (now with the Los Angeles Times), and editors Fred Turner, Jeff Otterbein and Tom Christensen.

Finally, I’d be remiss if I failed to mention that many of my incredibly, multi-talented colleagues in IBM communications got their start in the newspaper business.

Without newspapers, some day soon we may find ourselves asking the question — where have all the writers gone?