The first NBA game ever played took place on November 1, 1946, when the New York Knickerbockers defeated the Toronto Huskies, 68-66, before 7,000 fans at Toronto’s Maple Leaf Gardens.

More than 70 years later, Toronto – and really the whole country of Canada —  is a win away from it’s first NBA championship. The Raptors have three chances to knock off Golden State, beginning Monday at home.

The original Toronto team, the Huskies,  lasted only one year, finishing last, and  then folded. Of 11  teams that comprised the Basketball Association of America (BAA), only the Knicks and Boston Celtics survive as charter franchises. The Philadelphia Warriors, who won the first NBA championship,  moved to Golden State in 1962.

Three years later, the NBA was formed as a result of the merger of the BAA and National Basketball League (NBL).

In the first NBA game, the Huskies offered free admission to only fan taller than Toronto’s 6-8 George Nostrand, as shown above right.

Ossie Schectman, who played at LIU of the Knicks scored the league’s first basket in that 1946 opener. Leo Gottlieb led the Knicks with 14 points and Schectman finished with 11.

The Toronto Raptors were an expansion franchise, beginning play in 1995.  They are the only Canadian franchise in the NBA, and represent what is now the fourth largest city in North America.

Wouldn’t it be ironic if the Raptors captured a title before the Toronto Maple Leafs, who last won the Stanley Cup in 1967?

The Bullets and the amazing comeback of 1948 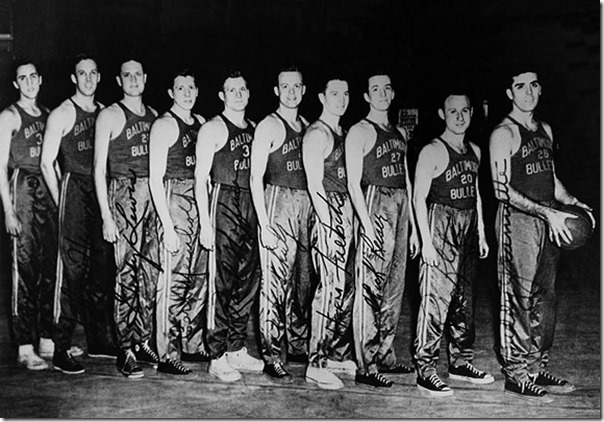 The Cleveland Cavaliers recently engineered the greatest second-half comeback in NBA playoff history when they rallied from 25 down at the half to beat the Indiana Pacers 119-114.

Amazingly, that broke a record that stood for nearly 70 years, ever since the Baltimore Bullets came back from 21 down to beat the Philadelphia Warriors 66-63 in the 1948 NBA Finals.

In an era without the 24-second clock and a three-point line, the Bullets came all the way back to win, on Philadelphia’s home floor no less. And it remained the largest comeback for 70 years, a lifetime of games. None of the great Celtics or Lakers team or Jordan’s Bulls or the Spurs or anyone else ever made a bigger comeback,

In 1948, the defending champion Warriors, fresh off their Game One victory, rolled to a 41-20 halftime lead over the Bullets. “In those days, if you got behind that far, the game was over,” Baltimore player-coach Buddy Jeannette recalled years afterward. “There was no 24-second clock to help you come back. But somehow we did. We took our time and made our shots and caught ’em. I don’t know if we were so good or Philly was so bad.”

Philly’s leading scorer Joe Fulks helped matters by continuing to shoot — and miss. And the Bullets helped themselves by driving to the basket for good shots. The home crowd sat stunned. The Bullets cut the gap to 48-40 in the third quarter. Then, in the last period, it was all Baltimore. “We were up by one with four seconds to go, and I tipped in a missed free throw,” Bullets forward Paul Hoffman recalled.

Connie Simmons led the Bullets with 25 points that night, Hoffman had 12 and Kleggie Hermsen 10.Joe Fulks led the Warriors with 27, most of them in the first half.

The 66-63 victory was one of the more impressive comebacks in sports history. Unfortunately, nobody paid much attention to pro basketball then. The story received a few paragraphs on the back page of The New York Times. Still, it gave the Bullets the momentum they were looking for.

The Bullets went on the win the series in six games for their only NBA championship. The Bullets were, in effect, an expansion team in the 1947-48 season having come over from another league, the American Basketball League to the Basketball Association of America, which would become the NBA beginning in 1949. The Baltimore franchise folded in 1954, and the Bullets remain the only defunct team to win an NBA championship.

The Baltimore Bullets returned to the NBA in 1963, after two years in Chicago as first the Packers and then the Zephyrs. They became the Capital Bullets in 1973, the Washington Bullets in 1974 and the current Washington Wizards in 1997. The Bullets beat the Seattle SuperSonics in seven games in 1978 to win their only NBA title.

Riding the NBA stairway to 7

The Cleveland Cavaliers are swimming upstream against history. No team has ever come back from a 3-1 deficit in the NBA Finals to win a championship. And only three teams have ever won a seventh game on the road.

For just the third time in history, a team has forced a seventh game after trailing 3-1 in the NBA Finals. That would be the Cavaliers, who will go to the mat against the Warriors on the road in Oakland.

In 1951, the Knicks trailed the Rochester Royals 3-0 and rallied to force a Game 7 but lost 79-75 in the final game (shown above). Arnie Risen led all scorers with 24 points as Rochester won its only NBA Championship. The Royals later moved West, first to Cincinnati, then Kansas City-Omaha, and eventually Sacramento. Somewhere in transit they become the Kings.

In 1966 the Lakers trailed the Celtics 3-1, only to win twice and force a decisive game. Boston held on to win that game 95-93 at the Boston Garden and capture a record eighth straight NBA championship. Bill Russell scored 25 points and took down 32 rebounds to lead the way.

Seventh games are a rarity in the NBA Finals. Cleveland-Golden State is just the 19th Game 7 since the league’s first playoff in 1947. Since 1984, only six Finals, including this one, have gone the distance.

And the home team – that would be the Warriors – has the decided edge if history proves true to form. Only three teams have won a seventh game game on the road. The last team to win a Finals Game 7 on the road was the Washington Bullets, who beat the Supersonics in Seattle. The Bullets won 105-89 behind center Wes Unseld, who was named MVP.

The Celtics did it twice – in 1974 against the Bucks in Milwaukee and.in 1969 against the Lakers at the Los Angeles Forum. In 1974, the road team won five times, including the last four games. The Celtics won 102-87 in what turned out to be Oscar Robertson’s final game.

In 1969, Boston, which finished in fourth place in the Eastern Division, came back to take the last two games as Russell outplayed Wilt Chamberlain. Boston held onto what had been a 17-point lead in the finale to win its 11th title 108-106.

Jerry West became the only player on a losing team to win Finals MVP. LA owner Jack Kent Cooke had thousands of balloons in the rafters ready to be released when the Lakers won. The balloons never came down.

Well, well, Stephen Curry and the Golden State Warriors are in a pickle. The Dubs set an NBA record with 73 victories, but unless they are able to stage a miracle comeback against Oklahoma City in the Western Conference finals, they’re toast.

And if they lose to the Thunder (or somehow make the Finals and lose to Cleveland), the Warriors will have no claim…none… to the title of NBA’s best team ever. It happens. In 2007, the New England Patriots finished the regular season unbeaten at 16-0 and yet lost to the Giants in Super Bowl 42. In 2001, the Seattle Mariners won 116 games, tying the 1906 Cubs for the most in MLB history. The Mariners were knocked out by the Yankees in five games in the ALCS. And the Cubs lost the 1906 World Series to their crosstown rivals, the White Sox, aka the Hitless Wonders.

The Warriors won the NBA title last year following a 67-15 regular season, tied for seventh best all-time. The 1986 Celtics, 1992 Bulls and 2000 Lakers all won championships after finishing 67-15. The 2007 Mavericks and this year’s Spurs also went 67-15, but were knocked out before the Western Conference Finals. The Washington Capitals were 49-11 in 1947, the NBA’s first season, but lost in the semifinals.

The Canadiens set an NHL record with 132 points in 1977 and won the Stanley Cup in the midst of a four-year championships run. But the 1996 Red Wings, with a record 62 wins and 131 points, were derailed by the Avalanche in the Western Conference Finals.

And the last shall be the first. Although not much was made of it, the last NBA champion, the Warriors, also won the league’s first title. So the Warriors span the NBA championship bridge from the first in Philadelphia to the last in Golden State.

The year was 1947. Less than two years after the end of World War II, Harry Truman was President, The Best Years of Our Lives won the Academy Award for Best Picture, Jackie Robinson broke baseball’s color barrier,and ENIAC, the world’s first electronic digital computer, was turned back on after being shut down for a nine-month refurbishment.

Eddie Gottlieb coached the Philadelphia five that year and forward Joe Fulks won the NBA’s first scoring crown, averaging 23.2 points per game. Fulks, who joined the Marines in 1943 and served in the the South Pacific, scored 37 points in Game One of the Finals, including 21 in the fourth quarter, to lead the Warriors to an 84-71 win over the Stags. Jumpin’ Joe is #18 in the team picture above.

Philly won the next two games, and wrapped up the series in five when forward Howie Dallmar snapped a tie by nailing a jump shot with less than a minute remaining to give the Warriors the lead for good in an 83-80 victory. Fulks led all scorers with 34 points in the clincher.

In addition to their four championships, the Warriors lost three NBA Finals, to the Baltimore Bullets in 1948 while representing Philadelphia, and in 1964 to the Boston Celtics and 1967 to the Philadelphia 76ers, both while playing in San Francisco. Al Attles, a lifelong Warriors guard, played in both Finals and later coached Golden State to the 1975 NBA championship.

If you liked this blog, you might like: The 1947 Holy Cross Crusaders were another great basketball team. Read the SportsLifer – Holy Cross was Once King of Hoops.