← How about an all-LA Super Bowl?
Matty and The Jinx–a rainy night in New York →

The day Rocky Colavito got the ‘W’ 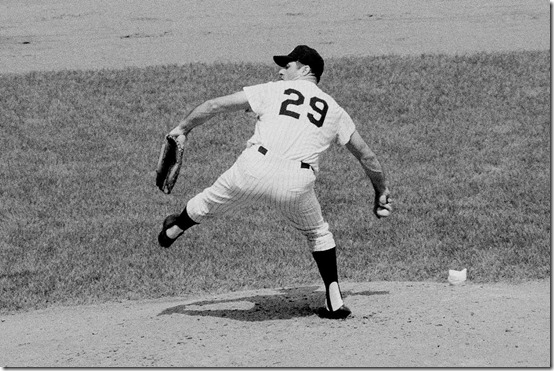 1968 will forever be remembered as the “Year of the Pitcher”. Denny McClain of the Tigers won 31 games, the last pitcher to win 30 in a single season. Bob Gibson of the Cardinals pitched to a record low 1.12 ERA; Cleveland’s Luis Tiant led the AL with a 1.60 ERA. San Francisco’s Juan Marichal was 26-9. On and on. Only one batter in the American League, Carl Yastrzemski, batted over ,300….just barely at .301.

And 50 years ago this month, slugger Rocky Colavito, called on in relief, recorded a victory in his final season with the Yankees. Yep, the Rock got the win.

On August 25, 1968, Colavito pitched 2.2 scoreless innings against Detroit, and wound up with a victory when the Yankees rallied from a 5-0 deficit to win 6-5. Colavito came on in relief in the fourth inning, and retired two batters to strand a couple of runners. 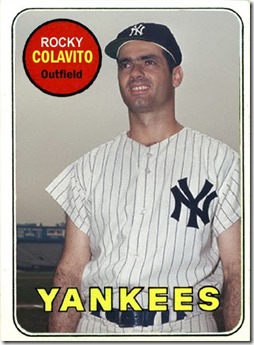 The Yankees got a run back in the fourth, and then struck with two outs in the sixth. Bill Robinson hit a three-run homer followed by a Bobby Cox solo blast that tied the score at 5-5. Colavito then walked and scored what proved to be the winning run on a Jake Gibbs single. Lindy McDaniel finished off the Tigers in the ninth to earn the save.

In the second game, Colavito homered against Mickey Lolich to spark another Yankee comeback and a 5-4 win for a doubleheader sweep.

The Tigers were good enough to win the World Series in 1968, but had a tough August weekend in the Bronx. In a Friday twi-night doubleheader (I was there), the Yankees won the opener 2-1, and then the two teams battled to a 3-3, 19 inning tie ended with curfew, with McDaniel pitching seven perfect innings in relief. On Saturday, the Yankees beat McClain 2-1 behind Mel Stottlemyre.

According to the rules of the time, the Friday game counted as a tie but had to be played again as part of the Sunday doubleheader where Colavito made history.

The Yankees played yet another doubleheader on Monday and shortstop Gene Michael pitched three innings in a 10-2 loss to California. The Stick gave up five runs to the Angels, but none of them were earned. On Tuesday the Yankees again split with the Angels. It was the Yanks fourth doubleheader in five days, including the 19-inning tie.

Rocky Colavito had an outstanding career. He hit four home runs in a game in Baltimore in 1959. Before the 1960 season, Colavito was traded to Detroit for Harvey Kuenn. For the only time in baseball history, a HR champ was traded for a batting champion. There was outcry in Cleveland following the deal.

Rocky Colavito also pitched three scoreless innings in a 1959 mound appearance with Cleveland. His lifetime ERA is 0.00. You can’t do better than that.