A Giant fall–from classy to clueless

And so it all comes down to this. The New York Giants have decided to bench their franchise quarterback, Eli Manning, for Geno Smith.

Yes, that’s right, coach Ben McAdoo, in a desperate attempt to save his job, is benching Eli, a two-time Super Bowl champion and future Hall of Famer who has started 210 straight games, second most in NFL history. This despite the fact that general manager Jerry Reese has given Eli virtually nothing to work with – unless you consider a porous O-line, virtually no running game, and a receiver corps besieged by injury as offensive weapons.

There’s something to be said for continuity in showing up to work every Sunday. Since Manning started his first game in 2004, the Cleveland Browns have had 24 starting quarterbacks.

Eli Manning has always been a class act, the ultimate teammate, who refuses to throw players and coaches under the bus, no matter how dire the circumstances.

Manning even handled the demotion with class. Although clearly shaken, his lips quivering and his eyes wet, Eli said: “I don’t like it, but it’s part of football. You handle it and I’ll do my job.”

So now the best quarterback in the long and storied history of the New York Football Giants, an iconic player, a guy who holds nearly every Giants passing record, has been benched by a guy who can’t coach and a GM who can’t draft talent.

Remember it was Ernie Acorsi, not Jerry Reese, who engineered the trade with the San Diego Chargers to bring Eli to the Giants in 2004. That worked out pretty well, thank you Ernie.

In their misguided wisdom, the Giants brain trust has decided that Geno Smith gives them the best chance to win Sunday against the Oakland Raiders. Geno Smith – are you kidding me? “We’re confident that we can put a plan together to put Geno in a position to be successful and go win a game,” said McAdoo.

Good luck with that decision. Geno Smith is not the future, he’s a stop-gap measure who couldn’t make it with the Jets. Heck, at this point in the lost season it makes much more sense to go with Davis Webb, the 22-year-old rookie and third round draft pick.

The Giants have mishandled QB transitions before. They released Phil Simms after the 1993 season despite the team reaching the playoffs and winning a wild card game.

Many former Giants have expressed outrage against the Eli benching via Twitter, including Simms, Carl Banks, Justin Tuck Plaxico Burress and David Diehl, just to name a few.

“I don’t think Eli ever envisioned, until now, playing for somebody else,” said Eli’s father and former NFL QB Archie. “That’s the love he has for the Giants. It is kind of unique and stronger than most. It’s not just the game he loves to play. He loves to play for the Giants.”

Although Eli may very well have played his last game as a Giant, there are several teams out there who would value the services of a soon-to-be 37-year-old quarterback with a penchant for winning the big game. Jacksonville, with former Giants coach Tom Coughlin now the GM, would be a good fit. How about Denver, where Eli could ride to the rescue and win a Super Bowl much like brother Peyton did several years ago. Buffalo, Miami and Arizona are all possibilities.

Payback is a bitch or so they say, and McAdoo and Reese will get theirs soon enough. Front office and coaching incompetence has earned the Giants a top five draft pick in the 2018 draft, and perhaps hope with a quarterback of the future.

Too bad Ben & Jerry won’t be around for the rebuild.

Before the 2017 season, the New York Football Giants were being touted as the team to beat in the NFC East. Some of the experts went a step further, writing Big Blue a ticket to the Super Bowl. Yet last than halfway through the year, it’s all come tumbling down.

Forget about contending for a title. These Giants are an embarrassment, bottoming out with new lows in team history. Both head coach Ben McAdoo and general manager Jerry Reese will take a fall in all likelihood. Players are already turning mutinous. A once-proud franchise has bottomed out.

The last time the Giants lost their first four home games and started a season 1-7 was 1980. That year the Giants finished 4-12, but help was on the way in the person of linebacker Lawrence Taylor, the second overall pick in the draft.

This Giants team, a two-point underdog to the winless 49ers on Sunday, is threatening to finish with the worst overall record in team history. In 1966, the Giants were 1-12-1 under coach Allie Sherman, a mere three years after losing the NFL championship game to the Bears.

Wait, it gets worse. Last week’s 51-17 loss to the Rams marked the most points the Giants surrendered in a home game since 1964.

On a cold, rainy Saturday afternoon nearly 53 years ago, the Cleveland Browns destroyed the Giants 52-20 at Yankee Stadium. Quarterback Frank Ryan tossed five touchdown passes for the Browns that day. Cleveland went on to win its last NFL championship a couple of weeks later, blanking the Baltimore Colts 27-0.

I remember listening to the game on radio that day while helping my father make lasagna. The NFL blacked out home games in 1964, which was probably a good thing – at least we didn’t have to watch. 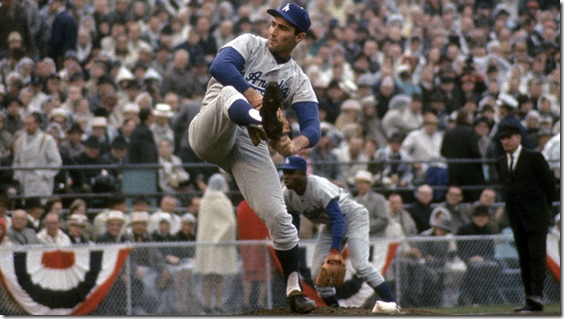 There’s nothing like a seventh game in the World Series. It’s a game in a season, and a season in a game. Astros vs. Dodgers. One game. Winner take all.

Throughout baseball history, there have been 38 seventh games since the first World Series in 1903. Tonight marks the first World Series Game 7 ever at Dodger Stadium, and the first for the Dodgers since 1965, when they beat the Minnesota Twins on a three-hit shutout by Sandy Koufax (pictured above), his second complete game shutout in four days.

Houston is hoping to win its first World Series since the franchise began play as the Colt 45s in 1962. The Astros, then a National League entrant, were swept by the White Sox in their only previous World Series appearance in 2005.

Just last year, the Cubs snapped a 108-year drought when they beat the Indians 8-7 in 10 innings in a memorable Game 7. So now baseball fans are blessed with a second straight World Series Game 7 for the first time since 2002, when the Angels beat the Giants for their only World Championship.

That was one of just six walk-off wins in Game 7 overall.

The Red Sox beat the Giants in 1912 when some Giant misplays and Larry Gardner’s sacrifice fly against Christy Mathewson enabled Boston to rally for a 3-2, 10-inning win. (Technically that was Game 8, since Game 2 wound up in a 6-6, 11-inning tie.)

Walter Johnson and the Washington Senators won their only World Series in 1924, also against the Giants, on a bad hop single by Earl McNeely in the 12th.

In 1960, the Pirates edged the Yankees, 10-9, on a home run by Bill Mazeroski, pictured at right. That remains the only Game Seven in World Series history to end on a home run. Incredibly, not a single strikeout was registered in that contest,

In 1991, Jack Morris pitched a shutout and Gene Larkin drove in the only run with a single in the 10th inning as the Twins beat the Braves.

Six years later, Edgar Renteria’s single in the 11th gave the Florida Marlins a 3-2 win over the Indians — and the championship.

In 2001, as the nation recovered from the 9/11 attacks, the Diamondbacks beat the Yankees in seven on a bloop, walk-off single by Luis Gonzalez off Marino Rivera  in the bottom of the ninth inning.

Other Game 7 facts and figures that may interest only me: