The 10 greatest comebacks in sports history

When Texas A&M rallied from 12 points down with less than a minute left to play and went on to defeat Maryland in double overtime in the NCAA West Regionals, it marked the biggest comeback in the last minute of a game in college basketball history. And it proved that “never say die” and “play to the last whistle” are more than just clichés.

The Aggies trailed Northern Iowa by a dozen points with 34 seconds remaining before they closed out regulation with a stunning 14-2 run that sent the game into overtime. A&M then won the game 92-88 in the second OT to advance to the Sweet 16 for the first time since 2007.

“We played the game the right way, even at the end,” said Texas A&M coach Billy Kennedy, who admitted afterward he would need time to wrap his head around what had transpired. “We didn’t have guys just coming down jacking up 3s. We tried to drive the ball.”

The previous college basketball comeback record was set in 2005, when UNLV rallied from 11 points down with 59 seconds left to beat San Diego State in overtime.

Some might argue the Aggies spirited surge ranks as the greatest comeback in the history of sports. It may well be. Here are the 10 biggest single-game comebacks of all time.

1. Buffalo Bills 41, Houston Oilers 38, OT, 1993 NFL playoffs: In the midst of their four-year Super Bowl run, the Bills engineered a comeback for the ages. Already trailing 28-3 at halftime behind four

touchdown passes by future Hall of Famer Warren Moon, Buffalo fell even further behind early in the third quarter when Houston safety Bubba McDowell intercepted a pass from quarterback Frank Reich, who was filling in for the injured Jim Kelly, and returned it 58 yards for another Oiler touchdown, putting the score at 35-3. At this point, many Bills fans headed home out of the chilly western New York weather, convinced the game was lost.

Amazingly the Bills rallied with five straight touchdowns, four on Reich passes, the last a 17-yard toss to Andre Reed to put Buffalo up 38-35 with less than three minutes left in regulation. In the waning seconds of the game, Houston’s Al Del Greco made a 26-yard field goal kick to tie the score and send the game into overtime.

Not to be denied, Steve Christie kicked a 32-yard field goal, winning the game for Buffalo 41-38 and completing the largest comeback victory (32 points) in NFL history. The Bills made it to the Super Bowl that year but lost to the Dallas Cowboys. It was the third of four consecutive Super Bowl appearances for the Bills; they lost all four games.

2. Cleveland Indians 15, Seattle Mariners 14, 11 innings, 2001: The Indians tied the greatest single-game comeback in MLB history when they reversed a 12-0 deficit to defeat the Seattle Mariners 15-14 in extra innings.  The Indians scored three runs in the seventh, four in the eighth, and five in the ninth to force extra innings before Jolbert Cabrera drove home Kenny Lofton with the winning run in the bottom of the 11th.

Cleveland scored five runs in the ninth after two outs to tie the game at 14-14, capped by a two-strike bases-loaded triple by Omar Vizquel. To emphasize what an insane comeback this was, they had been down 14-2 at the seventh inning stretch, and somehow managed to win.

What made the comeback even more impressive was that the Mariners set an American League record and tied the MLB record with 116 victories in 2001.

the history of the NBA Finals, the Celtics came back from 24 points down, the biggest Finals turnaround since 1971, to win Game 4, 97-91.  The victory gave the Celtics a 3-1 series lead and was the biggest reason Boston went on to win its first and only title since 1986.

4. Kentucky 99, LSU 95, 1994: If any lead is safe, you’d think being up 31 points with 15 minutes to play would suffice. LSU led Kentucky 68-37 in the second half of their February contest, but then the Wildcats rallied—led by Walter McCarty and Travis Ford—with 62 points to end the game with a 99-95 win. Kentucky coach Rick Pitino remarked, “I know I’ve never, ever witnessed anything like it.”

5. Los Angeles Kings 6, Edmonton Oilers 5, OT, NHL 1982 playoffs: The Miracle on Manchester is the nickname given to an NHL playoff game between the Los Angeles Kings and Edmonton Oilers. The game, the third in a best-of-five postseason series, was played at Los Angeles Forum, the Kings home at the time, which was situated on Manchester Boulevard. The Kings completed the largest comeback in NHL playoff history, going from being down 5-0 to win the game 6-5 in overtime. Combined with upset wins in Games 1 and 5, the Kings eliminated the heavily favored Wayne Gretzky and Mark Messier-led Oilers in a 3-2 series victory to reach the second round.

6. Maryland 42, Miami 40, 1984: Trailing 31-0 at halftime, the Terrapins came all the way back to stun the Hurricanes in the Orange Bowl. Frank Reich, the same quarterback who would lead Buffalo to an improbable comeback win against Houston in the NFL playoffs, threw six touchdown passes in the second half to spark the amazing rally. “In the first half, everything that could possibly go wrong, went wrong,” one of Reich’s teammates said. “In the second half, everything that could possibly go right, went right.” 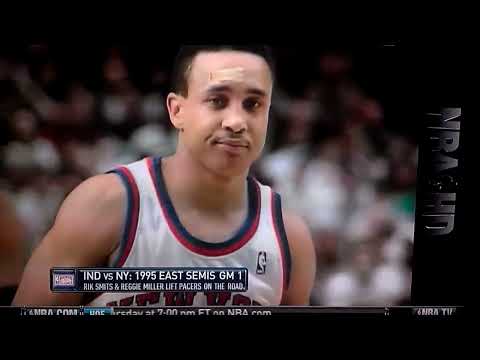 three to tie the game with 13 seconds left. Miller, who finished with 31 points, made two free throws seconds later to life the Pacers to the Game 1 win. In the postgame frenzy, the celebratory Pacers headed to the locker room. Reggie, in his euphoria, screamed “They choked, they choked.”

9. Rockets 81, Spurs 80, 2004: Tracy McGrady scored an unfathomable 13 points in 33 seconds to bring Houston back from an eight-point deficit in the final minute against the Spurs. McGrady capped it off with a buzzer-beating three for the win.

10. Philadelphia A’s 17, Cleveland Indians 15, 1925: The Indians led, 14-2 and 15-3, and had a 15-4 advantage in the middle of the eighth. Then came the deluge. Thirteen Philadelphia runs turned a huge deficit into a 17-15 win. Future Hall of Famer Al Simmons led the Athletics’ attack with three hits, including a home run, and three RBIs.

There are plenty of NIT banners in Army’s West Point gym, but not a single NCAA pelt.

The hardly fabulous five features Army, Northwestern, St. Francis of Brooklyn, The Citadel and William & Mary. Always a bridesmaid, never a bride. All of them.

Despite being led by two of the greatest in history – legendary coaches Bobby Knight and Mike Krzyzewski – the Cadets have never made it. Army turned down an NCAA berth in 1968 because Coach Knight thought his team was better suited to the NIT. That decision still haunts the Black Knights of the Hudson.

Northwestern has won 20 games twice in its history, in 2010 and 2011. But the Wildcats finished well back in the Big Ten both seasons. Ironically, Bill Carmody, who coached those teams during a 13-year tenure at Northwestern, made this year’s tournament in his first year at Holy Cross. Carmody, who twice led Princeton to the NCAAs, is the second winningest coach in Northwestern history.

St. Francis and William & Mary both had close calls, but lost the automatic NAA bid in heartbreaking conference tournament finals losses. Just last year, St. Francis won the Northeast regular season title but lost at home by three points to Robert Morris in the finals. William & Mary was beaten by one point by Delaware in the 2014 Colonial championship final. The Citadel won 20 games in 2009, but is generally considered one of the weaker teams in the Southern Conference.

Other notables in the never made the tournament club include Bethune-Cookman, Maine, New Hampshire, Stetson and Youngstown State

Like most Holy Cross fans, I never saw this coming. During a dreadful regular season the Crusaders finished ninth in the 10-team Patriot League, wound up 10-19 overall, and failed to win a single league game on the road.

Then Holy Cross then beat Loyola of Maryland 72-67 in the first round of the Patriot League tournament. Things started to get interesting when HC knocked off top-seeded Bucknell 77-72 in double overtime in the quarterfinals.

Looking for a bandwagon, I hopped on for the ride – namely a visit to West Point to see the Purple face Army in the semifinals. There the Crusaders jumped out to a 10-0 lead and never trailed, whipping the Cadets 60-38.

Miraculously, Holy Cross culminated its run through the Patriot League with a 59-56 win over second-seeded Lehigh. Again the Crusaders led wire-to-wire, and held on as Lehigh missed four straight three-pointers in the last 20 seconds.

Holy Cross became the first team in conference history to win four tournament games – all on the road – as well as knocking off the top two seeds in the tournament. The Cross has now won six Patriot League championships.

The Cinderella Saders are going to the Big Dance for the 13th time in their history. Bracketologists are speculating that they will face either Austin Peay or Farleigh Dickinson in a first round game, aka First Four, next week in Dayton, Ohio.

Holy Cross has had success in the NCAAs in the past.HC, led by a freshman point guard name of Bob Cousy, won the NCAA Championship in 1947, the school’s first appearance in the tournament. The Crusaders advanced to the Final Four in 1948, and made the Elite Eight in 1950 and 1953. In 1977 the Crusaders upset eighth-ranked Providence in an Eastern playoff before bowing out to top-ranked Michigan.

In recent years, Holy Cross suffered close, first-round losses to Kentucky in 2001, Kansas in 2002 and Marquette in 2003. HC dropped a first-round match to Southern Illinois in 2007.

Related Blog: Once upon a time, Holy Cross was king of hoops.